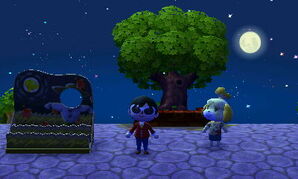 The Autumn Moon is an annual event that occurs on the full moon closest to the Autumnal Equinox. This means that the date of this event varies, sometimes occurring in September, and other times in October. Depending on the version of the game, Isabelle will award the player with a different item.

Below is a brief list of upcoming Autumn Moon events.

The Harvest Moon is the biggest and brightest full moon of the year. For farmers, it marks the end of the summer harvesting season. This moon rises earlier and provides more light for farmers after sunset so they can continue harvesting their crops.

In the American version of the game, Isabelle will reward the player with a wheat bundle. European and Australian players will receive a veggie basket.

Tsukimi  (月見), or Otsukimi, which literally translates to moon-viewing, refers to Japanese festivals honoring the autumn moon. Typically this takes place on the 15th day of the eigth month of the traditional Japanese lunisolar calendar. Traditions include displaying decorations made from Japanese pampas grass (susuki) and eating rice dumplings called Tsukimi dango to celebrate the beauty of the moon. Sweet potatos are offered to the full moon, while beans or chestnuts are offered to the waxing moon the following month.

In the Japanese version of the game, Isabelle will reward the player with a Dango.

Chuseok (추석), originally known as Hangawi (한가위), is a major harvest festival and three-day holiday celebrated in Korea that's celebrated on the 15th day of the eighth month of the lunar calendar. As a celebration of the good harvest, Koreans visit their ancestral hometowns to share a feast of Korean traditional food such as songpyeon and rice wines.

In the Korean version of the game, Isabelle will award the player with a Songpyeon.

Community content is available under CC-BY-SA unless otherwise noted.
Advertisement