The Dace, Phoxinus tennesseensis, is a fairly common river fish that can be found between the hours of 4pm and 9am, year-round. It can be sold for 200 Bells.

"Dace can live in cloudier, murkier water than most but are easy to see as their numbers are so plentiful. They are related to carp, and some species of face live in the ocean as well as rivers and streams. During mating season, the bellies of the males develop an orange stripe to indicate their intent to mate." 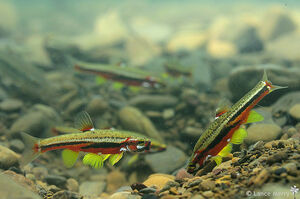 The Tennessee Dace is a species of ray-finned fish in the Cyprinidae family. It is found only in the United States, commonly in East Tennessee in spring fed first-order streams, often in silt and fine gravel pools, or undercut banks. These streams are usually no more than 2 meters in width. Their diet is similar to that of other dace species, mainly consisting of attached algal growth. Due to limited distribution and other factors, they are considered “in need of management" in Tennessee. Future threats include human development and climate change.

A player catching a Dace
Community content is available under CC-BY-SA unless otherwise noted.
Advertisement