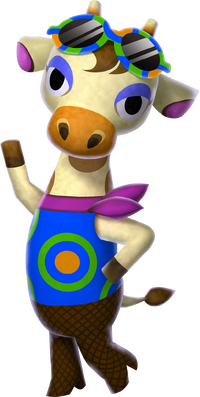 Gracie is a celebrity fashion designer in Animal Crossing New Leaf. Gracie is a male in the Japanese version of the game.

Gracie is a giraffe with pale yellow and dark brown hooves, brown spots on the skin, short brown hair, and purple eyeshadow. Gracie wears a purple scarf, and a brown pantyhose on the legs.

One of Gracie's notable apparel is the tank shirt. The shirt has Gracie' personal design consisting of a blue fill and two circles colored green and orange. This is used in all of Gracie's furniture involving cloth.

She wears round rimmed shades on the forehead colored as the same as her signature tank shirt, although her appearance stays the same.

After the player has expanded the Nookling store in their town to  T.I.Y., Gracie will start to visit the town's Plaza on completely random days. However, Gracie may rarely appear for some Players, making it more difficult to get the T&T Emporium. While in the plaza, Gracie expresses an interest in opening a shop, but in order to do so Gracie must check if the fashion sense of the town's people meets Gracie's fashion standards.

This article is a stub. You can help Animal Crossing: New Leaf Wiki by expanding it.

Community content is available under CC-BY-SA unless otherwise noted.
Advertisement