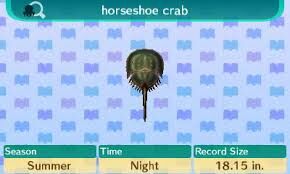 " I caught a Horseshoe Crab! Its luck has run out! "

" Horseshoe Crabs are called "living fossils", as they have not evolved since the age of the dinosaurs. Their backs are often covered by a hard shell, forming a simple silhouette with their flat backs and long tails.Though referred to as crabs, they're actually more closely related to spiders and scorpions."

Retrieved from "https://acnl.fandom.com/wiki/Horseshoe_Crab?oldid=8118"
Community content is available under CC-BY-SA unless otherwise noted.