Isabelle (しずえ Shizue) is a dog that acts as the secretary and assistant of the town's mayor. When first announced in the New Leaf developer commentary, Isabelle was not given a name, and was referred to as Secretary (ひしょ Hishyo). In the June 2012 Nintendo Direct, she was given the name Shizue. Her name was localized as Isabelle in the February 14th, 2013 Nintendo Direct. She is the twin sister of Digby, who works at and stands in front of the entrance to the Happy Home Showcase.

She also appears in a manga called Tobidase Dōbutsu no Mori Minna de Seseragi Mura Life as a main character.

Isabelle is a bright yellow Golden Retriever puppy. She's very cheerful and looks happy most of the time, having rosy cheeks and a smile. On her tail and face she has a white patch of fur. Her default outfit is a green checkered shirt with a white top and red ribbon underneath, with a navy blue skirt, though her outfit will change in colder months, as well as on certain holidays. Her hair is tied up with a red ribbon with bells that jingle as she walks. In other games she has been seen wearing a light golden cardigan.

Isabelle can be found in the Town Hall at all times except during events. There are many tasks she can perform for the player, such as change the town tune, add or delete public works projects, and file complaints about villagers. For more information on these tasks, please view the Town Hall page.

When starting your game up in NL 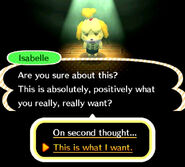 Deleting your Town in NL
Community content is available under CC-BY-SA unless otherwise noted.
Advertisement