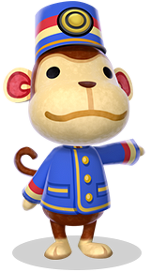 Porter is a monkey that works in the Train Station. He has appeared in Animal Forest and Animal Crossing, then made a reappearance in Animal Crossing: New Leaf, due to the train station reappearing in place of the gate. The player must talk to him in order to open their gates, or to visit someone else's town via Wi-Fi or local connection.

Porter watching a player arrive in the train station.
Add a photo to this gallery

Retrieved from "https://acnl.fandom.com/wiki/Porter?oldid=7254"
Community content is available under CC-BY-SA unless otherwise noted.