The Town Hall is the building in which all mayoral duties will be carried out, and is open 24 hours a day.  The town's secretary, Isabelle, can normally be found in the Town Hall, except for when specific days roll around, like the Summer Solstice in June. The hall has two points of interest that can only be accessed when Isabelle is present: the front desk and the mayor's chair.

At the front desk, the player can ask Isabelle about changing the town tune, changing the flag, checking citizen satisfaction, or reporting problematic citizens.

Once problematic behavior has been reported, Isabelle will tell the player she will talk to the citizen about it, and then the citizen will change it. If a design was deemed offensive, the citizen will have changed it (for example, their shirt will be different), and if inappropriate speech was reported their phrasing will change.
The mayor's chair can be found at the back of the Town Hall, and to access its functions one must sit in it. Upon doing so, Isabelle will walk over and present the player with the opportunity to establish a new ordinance, start a new public works project, or demolish an existing public work once you have established a permanent residence and gotten your approval rating to 100%.

Once a town has reached an excellent citizen satisfaction rating, Isabelle will give the mayor two new public works projects: remodeling the town hall (498,000 bells) as well as both of the flower clocks. (87,000 bells) 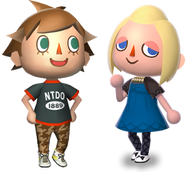 The player(Mayor)
Add a photo to this gallery
Retrieved from "https://acnl.fandom.com/wiki/Town_Hall?oldid=9395"
Community content is available under CC-BY-SA unless otherwise noted.