The Train Station is run by a monkey named Porter. By talking to Porter, the player can open their town's ticket gate to invite guests, as well as board a train to visit a friend's town. If the player takes Katie with them, she will board the train and be taken to another town alongside the player. Lloid makes a brief appearance here when collecting donations for the Dream Suite.

The train tracks divide the Town from Main Street. Trains are used to travel between towns, and for the beginning of the game when a player first arrives in town. Trains randomly pass across this tracks throughout the day, even if the player does not have guests over. The gates allowing access to Main Street will close for a few seconds as they pass through. During this time, the player will be unable to cross the tracks. 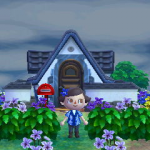